Not just any old tart. 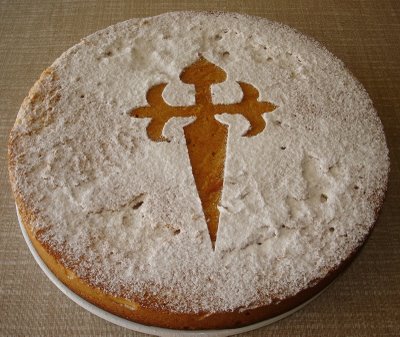 Tarta de Santiago, Galicia’s most famed dessert, was not long ago declared, in gastronomic terms, a protected species. The designation itself, known as an IGP which stands for Indicativo Geográfico Protegido, is basically a tool which affords this most Compostelan of desserts a means of protecting its image and reputation in the modern world.

The declaration was greeted with satisfaction by the those in the industry, who pointed out that it was only the beginning, but that together with the authorities, real steps could now be taken to control what is sold in many establishments as Tarta de Santiago. Several months on, it’s still possible to encounter tartas labelled de Santiago but whose ingredients are not strictly in compliance with those approved under the new regulations, but cases brought before the Tart Inquisition are now thankfully few are far between. In accordance with the declaration, the authentic Tarta de Santiago must be made exclusively of almonds, sugar and eggs in exact proportions: 33% Mediterranean almonds, 33% sugar and 25% egg.

Other ingredients such as grated lemon rind, sweet wine, brandy or aguardiente de orujo may be added, as long as the proportions of the basic ingredients remain unaltered. The Cruz del Apóstol Santiago or St.James’s cross that adorns the tart and makes it easily distinguishable from others is ‘drawn’ with icing sugar as the final touch.

Any other added ingredients, however cool or trendy, will surely detract from the true essence of this Galician dessert par excellence and, therefore, damage an image wrought over decades of toil in the pastelería. So the next time you’re looking for Tarta de Santiago, be sure to check the list of ingredients and the all-important IGP label. It’s not just any old tart, you know.