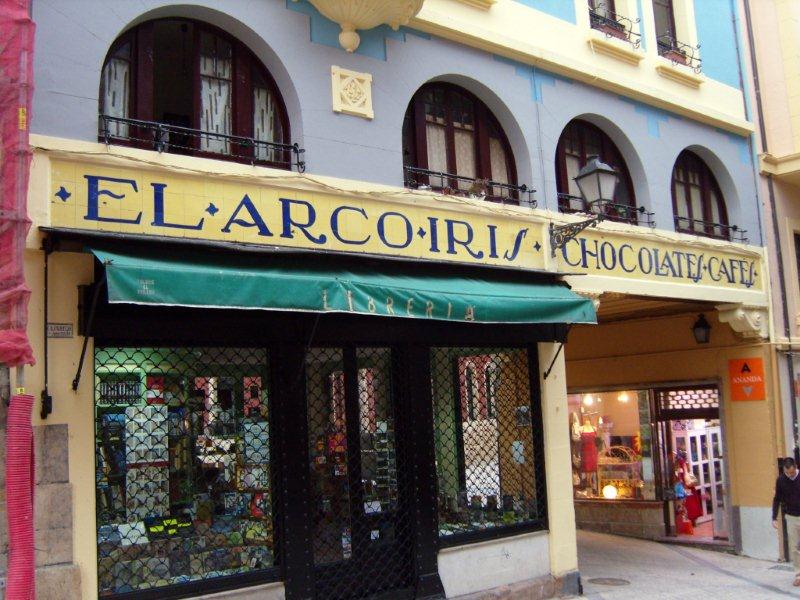 UBI EDO, UBI EDO, repeated Ángeles, the guide assigned to me by the Oviedo Tourist Board. I repeated the words back to her, parrot fashion. It all began here in 761 she proudly declared. Fair enough, I thought; it must be the ancient rendering of the name Oviedo, a fairly close approximation of the modern day Oviedo. After some Visigoth archbishop, perhaps? She grinned, repeating the words again, as if impressing upon me the need to comprehend the profound symbolism of the words: UBI EDO… it means ‘where I eat’ in Latin. How wonderfully appropriate I thought, as Oviedo is a gourmet’s dream, but more of that later.

Where it all began indeed. Back in the 8th century, Oviedo was the seat of the tiny Asturian monarchy, independent, but hanging on by the skin of its teeth. The Moors had crossed the River Duero, an imaginary border between north and south for many northerners even today. They organized military campaigns called ‘razzias’ from time to time, mainly to keep the Asturians on their toes, for they had little interest in conquering what was for them a remote, inaccessible area populated by savages. With the fall of the south to the Moors, many of the holy relics were brought to the mountains of Asturias and hidden in secret locations till better days came along.

With the fall of the Caliphate of Cordoba, the Moorish grip on the country began to lessen and the Christian kingdoms in the north gradually began to recover land in what came to be known as the ‘Reconquista’. At this time Oviedo was a major pilgrimage centre as the Holy Crypt in the Cathedral housed, and still houses today, some pretty serious pilgrim-pulling relics, including the Santo Sudario or Holy Crucifixion Shroud and two 10th century jewelled crucifixes, the Cruz de los Angeles, symbol of Oviedo and the Cruz de la Victoria, symbol of Asturias.

With the alleged discovery of the remains of the Apostle St. James in the 9th century, on the site of that was later to become Santiago de Compostela, the ‘Reconquista’ of Muslim territory was well and truly underway. Within a couple of decades, the Moors had overrun the peninsula, with the spiritual aid of the Prophet’s arm and the Christians of the north now had something to rally around too.

The Cathedral of Oviedo is a hotch-potch of architectural styles, ranging from Pre-Romanesque to Baroque. Whilst not as dramatically eye-catching as its purely Gothic sisters at Burgos and León, it is still a most impressive building, particluarly the cloisters and the crypt containing the holy relics.

The first thing that catches your eye in Oviedo is how spotlessly clean the city is. I was told that they’d won several awards for being Europe’s cleanest city and it was certainly a pleasure not to be scrutinising the pavement Jack Nicholson style, dodging doggy deposits. The ten minute or so walk from the bus station was a real eye-opener. Normally drab, run down and slightly seedy areas, in Oviedo, you can stroll, suitcase and rain permitting, up and down well lit, spacious boulevards. When you turn into Uria and head towards the city’s lung, the lovely Parque San Francisco, it’s feast your eyes time. I spotted belle époque, art-deco and eclectic styles side by side, jostling for your attention, some of them extraordinary examples of how to flaunt your wealth and not give a damn.

The 400 year old Universidad de Oviedo is a grand old building. It seemed strange to think that this was the scene of bitter fighting during the Spanish Civil War. The bullet-pocked pillars of the cloister bear grim testimony to what happened here. Unlike the rest of Asturias, the aristocratic and very bourgeois Oviedo put its money on General Franco’s ‘National Crusade’ and so became a target for some of the most vicious Republican bombing of the Civil War. As you walk under the clock tower in the Plaza de la Constitución, look up to your right and you’ll see a memorial plaque on the wall. It commemorates the Generalisimo’s 1940 visit to the city to reopen the newly restored Town Hall and attend a very symbolic thanksgiving mass. Franco likened his crusade to the Christian re-conquest of Spain in the middle ages.

Walking down Fiero from the Plaza de la Constitución you’ll see the Fontán, a lovely wrought-iron glass-canopied market place, built in the early 1900’s. It opens all day from eight to eight and has some spectacular fish stalls. While I was there I witnessed a bunch of marujas or old ladies being terrorised by a stall-owner with a live 3 ft cazón, a small shark known as tope in Britain. As he struggled to keep it from taking a chunk out of his arm, I asked him how it would be prepared, locally. He came back with what seems to be the standard reply to that sort of question in this part of Spain; a parsley, garlic and olive oil marinade overnight and doused in flour and deep fried for two or three minutes, or simply boiled and served with potatoes and olive oil. Perfect.

Oviedo is fabulous for wandering from bar to bar, tapeando as you go. The trick is to order your caña or vino, then wait, if necessary, for five minutes. Read a newspaper, engage somebody in conversation, but just wait a while. More often than not, the waiter will eventually bang your first free ‘pincho’ down on the counter in front of you. If this doesn’t happen then you’ll just have to choose from the selection behind the glass case in front of you. All of the following establishments serve some imaginative and beautifully presented tapas: Siete Plazas Cimadevilla 11, La Consistorial Plaza del Sol 2 and Casa Amparo Arco de los Zapatos. Ask at the Tourist Office for the gastro mapa, an excellent route map that will direct you to over 50 establishments across the city that turn out quality pinchos and tapas.

For some hearty, exquisitely prepared Asturian cuisine, look no further than El Raitán Plaza Trascorrales. This restaurant got a deserved thumbs up from Woody Allen who’s a frequent visitor to the city. Their repertoire includes the Asturian classics of Fabada Asturiana and Pote Asturiano, both bean based stews, laden with saffron, chorizo, morcilla or black pudding, greens (pote) and assorted pork bits, you would definitely only eat this at lunchtime. Their €32 set lunch is incredible and features crema de andaricas, or cream of velvet swimming crab soup, cebollas rellenas de jabalí or whole onions stuffed with wild boar, pote, fabada and three types of pudding, frixuelos, similar to crepes, casadielles, a type of walnut pastry, and a divinely creamy arroz con leche or rice pudding. A well-deserved siesta is obligatory after stoically munching your way through this lot!

For a more modern take on Asturian gastronomic experience, try the superb Carta de Ajuste at Cimadevilla 16. The hamburguesa de ciervo, or minced venison with cherries, foie gras and onion confit was simply sublime, as was the pato asado estilo carta de ajuste, crispy roast duck, served with a superb wild mushroom risotto and sopa de frutos rojos or red fruit soup. After lunch or dinner you can retire upstairs for a stylishly prepared and served gin and tonic where the owner Luisma and his staff will make you feel most welcome.

On the fish front, Pixín or monkfish is very popular, as is bonito or tuna, so popular that the Cantabrian fleet from the Basque Country in the east to Galicia in the west caught 18 million kilos of the stuff in 2006. La Gran Taberna
Plaza Porlier 1 is a very elegant and refined eatery. Whilst there I tried the cazón, which I’d seen harassing the marujas in the market earlier in the day. It was served boiled, probably just for a few minutes, with new potatoes and was exquisite. Towards the end of lunch, the Archbishop of Oviedo arrived, causing quite a stir, with several folk standing up to kiss his ring. It still happens.

Asturias is cider country and in Oviedo there’s a whole street dedicated to its quaffing. Gascona-El Bulevar de la Sidra is where it all happens. I was told there’s a strict etiquette to follow and that it’s not the kind of thing one should do alone as it’s a social thing. Basically, the waiter brings you and your gang one bottle of cider and one glass. Then the spectacle begins. After uncorking the cider the waiter raises his right arm and the bottle aloft, the other arm, holds the glass down by his left side. He’s not allowed to look at either the bottle or the glass, so looks nonchalantly into the distance, through the window to the street perhaps. He tilts the bottle and the cider pours down into the glass below. As it hits the side of the glass, it froths up a bit, at which point it’s swiftly handed to the first person to stick their hand out. You must drink it in one go, but always leave a little to swirl around the glass, so as to ‘clean’ the area where your lips have had contact with the glass, and so on, till the bottles are done, you’ve killed each one and the table is full and overflowed.

One of the best, if not the best, places on Gascona to experience this is La Pumarada. It’s also a great place to have lunch or dinner and is always packed to the door and buzzing. Specialities of the house are Parrillada de Mariscos, a kind of assorted seafood platter, Chuletón de Buey a la Piedra, this is a humungous ox t-bone weighing up to two kilos or more and cooked on a scorching hot stone slab. I had the mind-warpingly scrummy Paella de Bugre which is made exclusively with local clawed lobster. The delicious Pastel de Cabracho, or red sea scorpion mousse here is reputedly the best in Asturias. Another atmospheric place for some cider swilling is the Plaza de Fontán , the old market place. Its pretty 16th century colonnaded interior is often used as a film set and when the tables and chairs are set out it’s a perfect place to lunch, dine and while away the hours.

Oviedo certainly bewitches all who visit her, from the famous to the humble, so prepare yourself for something truly special when you step off that train, bus or plane.