Lamprey Pie – A Dish To Set Before The King 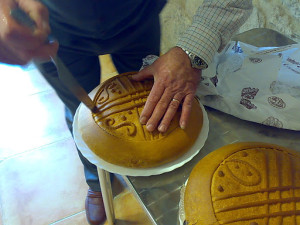 In accordance with a centuries old English court tradition, Her Majesty Queen Elizabeth II was presented with one on her coronation day in 1952. In the small Galician town of Pontecesures, on the River Ulla, lamprey pies are still very much a part of local tradtion. Every year, coinciding with the lamprey’s long journey from the ocean to its freshwater spawning grounds, usually from early January to the end of April, thousands of these prehistoric creatures are caught in special traps called ‘butrones’. Pontecesures, along with the villages of Arbo and As Neves on the River Miño, holds an annual lamprey festival in April where you can sample the beast in its many guises: smoked, stuffed, fried or braised, bordelaise style. The pies themselves are a work of art and coveted prizes are awarded at the festival for the most beautiful examples, taking into account tradition, presentation, creativity and, most importantly, texture and flavour. Many thanks to my good friend Carlos Cadilla for his excellent photo.