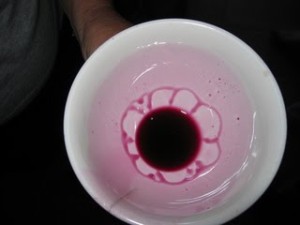 Baiona has one major claim to fame in European history. In 1493 its citizens were the first in Europe to hear the news of the discovery of a New World, or at least a new trade route to the East Indies, as it was then believed to be. Every March the town holds a grand mediaeval knees-up called the Fiesta de la Arribada which celebrates this momentous event. You will see a replica of navigator Alonso Pinzon’s ship La Pinta docked in the harbour. The ship brought back a cargo of strange new foodstuffs such as tomatoes, potatoes, avocadoes, chocolate, maize, and of course, tobacco. Armed with two maps from the friendly tourist office, I made my way along the sea front and headed for the Pazo de Mendoza hotel on the sea-front. This is one of the entrances to the casco viejo or old town. I grabbed a terrace table there, ordered a café solo and started to plan my route.

The town is actually quite small and all the action is concentrated on c/ Ventura Misa which runs more or less parallel to the sea front. In fact, no sooner are you in this street than the touts from a nearby restaurant are desparately trying to lure you into their clutches. Call me bloody-minded, but this for me, is good enough reason to give the place a seriously wide berth. Admittedly, the ‘aquarium’ in the window had some pretty portly cigalas, or Norwegian lobsters, all strategically sitting up on large oval platter, but it was the sunken eyes of the besugo, or red sea bream that convinced me that the place wasn’t for me. Never trusta besugo with sunken eyes and hollow jowls. I pressed on, giving the smarmy tout a woefully unconvincing ‘no thanks I’ve already had lunch’. It was 12.30 and indeed time for me to be to movin’ on. Twenty or thirty yards ahead I spotted a group of elderly gentleman standing round two old barrels, a sure-fire sign of a good watering-hole. If the old boys are outside on a cloudy, though not terribly cold day in March, it means that the place is heaving inside, and heaving inside usually spells decent wine and decent pinchos. I’d arrived at the wonderfully atmospheric O Refuxio D’Anton. As I fought my way through the doorway I was greeted by a seriously listing-to-portside retired fisherman, his steely blue eyes met mine.

After a few nanoseconds of deluded recognition, his wizened Yarmouth luggerman’s mouth uttered the time-honoured scatological rejection of his maker, me cago en Dios!, a curse which would have had him incarcerated for blasphemy 30 or 40 years ago. Now this is just my kind of place, literally falling down around your ears. A nicotine stained plywood board sealed off the kitchen from prying eyes. In front of that there were a few tables and chairs for sit down tapas. The scrummy aroma of zorza (spicy pork) and xoubiñas (baby sardines) wafted across the bar and cloudy, acidy pais blanco white wine was being poured from large white jugs into little white porcelain bowls. There was a gum-staining red version for those with slightly more sophisticated palates. I shouted my choice to the barmaid and for a pincho I was offered huevos rellenos, or stuffed eggs, empanada de bonito casera, or homemade tuna pie, and of course, tortilla de patatas which the lady assured me had been made with ghuevos de casa or eggs from her own hens, with the characteristic throat-clearing pronunciation of the G common to Galician coastal towns.

The place was absolutely deafening. Two or three rowdy fishermen were shouting each other down in one corner, whilst a large group of pijos, or toffs up from Madrid for the weekend, were gleefully roughing it in the other. I downed the contents of my cunca or porcelain bowl, paid my 50 cents to the grinning barmaid and headed out into the streets, heading for another joint. Sadly, tascas like this are on the endangered species list so check the place out before it’s too late, if it isn’t already.