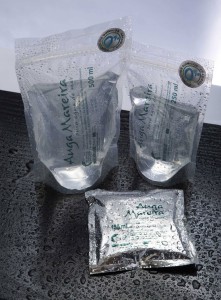 We all know that Spain has ruled the haute cuisine roost in recent years, deftly displacing the French from the top perch. This culinary prominence has brought about an astonishing revolution in the development of food products aimed at the kitchens of feted michelin star chefs like Joan Roca, Carme Ruscalleda and others.

According to Ferrán Adriá, the Isaac Newton of molecular cooking and founder of El Bulli, Galician waters are home to the very best seafood in the world. With this in mind, local (Illa de Arousa) entrepreneur Rodrigo Lojo decided to throw caution to the wind and launch a product that would hopefully take the aforementioned kitchens by storm. His keen eye was also set on the gourmet end of the Galician seafood canning sector, bread and confectionary outlets, and of course home kitchens.

The idea is that fish, shellfish and edible seaweed is cooked or rehydrated in sea water as opposed to tap water. By either using 100% sea water or a combination of tap water and sea water, the product retains its texture and organoleptic properties. The briny stuff is actually taken from the Ría de Arousa, one of the biggest natural seafood harvesting areas in the world.

This Auga Mareira or tidal water is then subjected to an exhaustive filtering process known as higienización before it is tastefully packaged in 5 liter, 15 liter and 1000 liter boxes with tap dispensers. Smaller options of 250ml and 500ml are also now available. Plans are also in the pipeline to launch Auga Mareira beer and an Auga Mareira pizza mix. Definitely something to stock up on on your next visit to these shores.