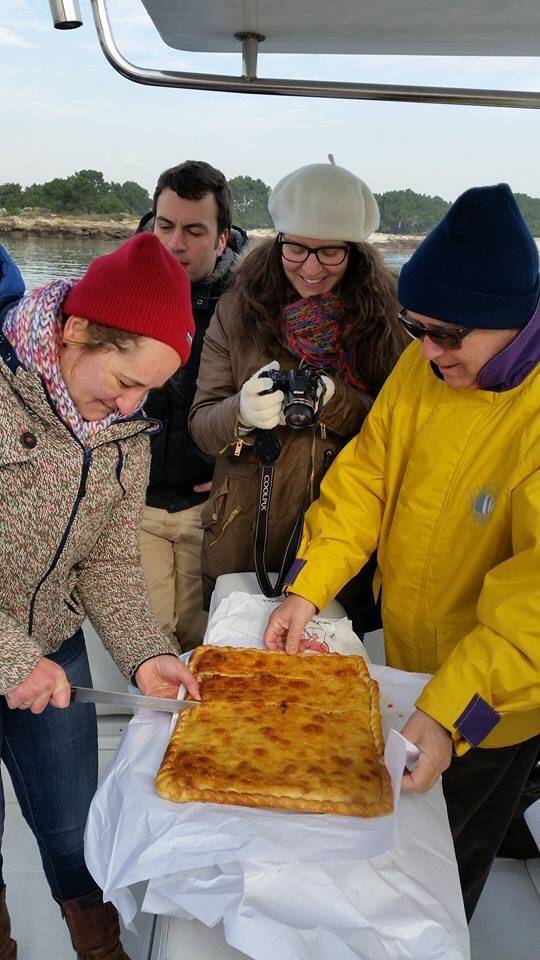 Though most people would be inclined to do this kind of thing during the warmer months of the year, a group of us this morning bravely donned duffle coats, mufflers, mittens and woolly hats to brave a bitingly cold Ria de Arousa.

Our host was Gabi Comojo of Amare Turismo Náutico. We set out from the Illa de Arousa, a small island that sits in front of the small port of Vilanova de Arousa. As we weaved in and out of mussel rafts we marvelled at sights such as the Cormorant infested rock known to islanders as “La Concagada” which translates roughly as “rock with a pile of bird poo”, huge Great Black-Backed Gulls, the beguiling Illa Areosa, an dolmen dotted islet with a beach that compares favourably to any in the Caribbean, and bobbing boats of all sizes and colours busy harvesting mussels,  spider crabs and cuttlefish. To be given the chance to pull up alongside several of these boats and chat to the fishermen about their work was wonderful.

The nutrient laden waters of the Ría de Arousa are the main bread winner for the islanders with tourism providing a welcome boost to family coffers during the summer period when thousands of people flock to the Rías Baixas from other parts of Spain and Northern Portugal. However, the diminishing stocks of clam for which the area is justifiably famous is something that has the locals and more than a few marine biologists totally stumped. Many islanders will tell you that they sow as much as they reap and that conservation of the rich marine ecosystem that surrounds them is of paramount importance to the whole region. One can only wonder.

Before heading back to port, our guide and skipper Gabi deftly steered the boat into a nicely sheltered cove and served up the most delicious empanada de pulpo or octopus pie, washed down with an equally delicious Albariño. As we passed by the aptly named “pile of bird poo rock” again, I was already making a firm note to self about a return visit, perhaps around the time of the Feast of St.John (23rd of June), when the local refrain swears that “A Xouba en San Xoan molla o pan”. This means that the sardines which pile into the Ría around this time are so plump and brimming with healthy Omega3 oils they literally soak the bread they’re served with. Marvellous.