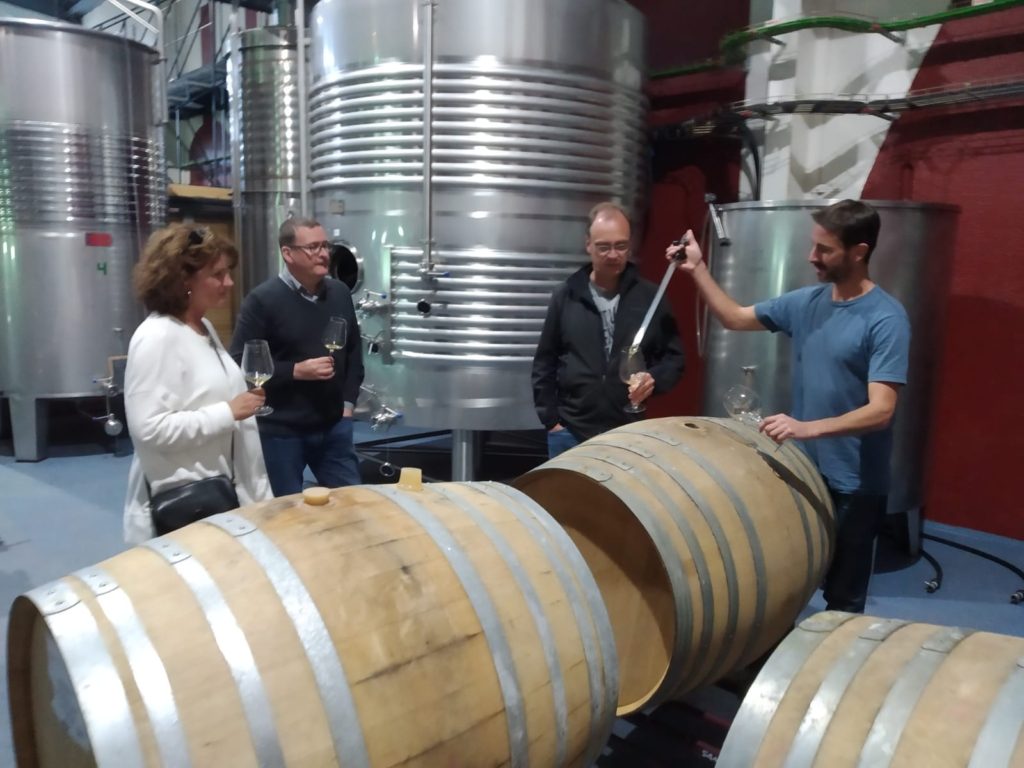 In my travels around north-west Spain, I hear time and time again that what differentiates a good wine from one that’s entirely in a class of its own is the toil out in the vineyard, before the grapes even reach the cellar.  If this is the case, then why do the so-called ‘flying winemakers’ seem to win all the plaudits? It’s very true that some of them have gained near celebrity status in recent years and are spoken of in hushed tones, but what about the guy that toils in all weathers, lovingly nurturing his vines, sometimes sleeping out under the stars at critical times, heroically battling stress and fatigue from bud-break to veraison?

A lot of the people I take folk to see are the living embodiment of both – viticulturalist and winemaker. With this in mind I approached San Francisco Bay Area native Zachary Elfman who touched down in the Ribeira Sacra in 2015, just after working harvests in South Africa’s Stellenbosch and Argentina’s Mendoza. In Stellenbosch he learned proper natural winemaking from vineyard to crush to punch downs and aging. And while working the night shift in Mendoza at Zuccardi’s Q division he learned what quality industrial winemaking was all about, learning about standard issue winery equipment, concrete fermenters, and sneaking some Fernet (popular in both Argentina and San Francisco) as the sun rises at the end of a shift.

The Ribeira Sacra is an area absolutely steeped in winemaking tradition, going back to the Roman era and perhaps before, so what brought you here Zak? Of all the wine regions in Europe, what was this place saying to you?

After the harvest internships I was encouraged by winemakers that I respected to just “make a few barrels” and my initial idea was actually to start out with an urban winery in London, where I had lived for eight years. After looking at property prices, grape transportation costs and the prospect of grape deterioration in transit from the continent, I quickly ruled that out. Now with Brexit complicating matters I am glad that I did!

I had studied in Madrid, my girlfriend Inés is from Asturias, I spoke Spanish, and knew that there was an abundance of old vines being abandoned in the country. So we decided to take a road trip. I have always felt more comfortable in the North of Spain, as it is geographically pretty similar to my home of Northern California with a rugged coastline and green forests, while there are some surprising cultural similarities as well: people appreciate the outdoors, are relatively calm, and do not tend to value outward appearances as much as in other places. In London I had also developed a more European palate for terroir-driven, fresher wines in contrast to the fruit-forward wines I was brought up on. So we took out on the road through the Northwest, stopping through the Rias Baixas, Ribeiro, Ribeira Sacra, Valdeorras and Bierzo. There are great wines and special vineyards in all of them, but any wine lover who has been to the Ribeira Sacra must agree – the terroir is awesome. I was effectively stopped in my tracks.

How difficult was it to build up your portfolio of contacts (thinking here mainly of the location of interesting plots, acquiring them and/or getting permission to farm them? As you know, Galicians have a somewhat unjustified reputation for wariness. Were people rather backward in coming forward when you started out on your quest?

My Spanish skills were decent when I arrived, but they quickly improved and evolved as I found myself in the rural Ribeira Sacra with few English speakers around. One of the first words I added to my vocabulary was “engañar”, which roughly translates to deceive. And it seems to happen a lot. Funny enough, I have actually heard from some that I have an advantage coming from the outside because the folks trust their neighbors less than anyone else! And fortunately I was able to make some really good friendships early on in Chantada, and those folks helped me out tremendously with any business dealings that seemed suspect.

In any case, after a couple of local newspaper articles, word spread pretty quickly that there was an American in the Chantada area looking for grapes. That first August I must have walked twenty-five vineyards with paisanos telling me how much “grado” their grapes had each year. I settled on three, and to this day I still make the same three wines. Lets’s just say Balanced Crop Loads is not a concept that is discussed too often among the growers in the region.

But over the years our relationships have developed and I now farm one of those parcels on a “rented” basis.

Were there any episodes where lessons were learnt the hard way?

This goes back to the trust issue from the prior question. I am sure that there are plenty of other winemakers that have had to throw out a fair few kilos of jerez (palomino) when they are sorting through godello. But when you keep finding clusters of jerez hidden in the mencia crates you know that it was intentional!

For folk who are starting out on this road whether winemaker, budding sommelier or just your average wine-nut thirsting for more knowledge, what sort of pointers would you give them?

Taste with people that know more than you and read as much as you can. Unlike in some other industries, the wine trade is full of people that are open and willing to share their knowledge, which is very refreshing and encouraging. And there are great books that are easily approachable to those without technical knowledge. I took the WSET level 3 course and found it well worthwhile. Of course, once some of the basics are understood, there is no better experience than working a harvest if time permits.

Are there any winemaking myths that particularly irk you and that you think need addressing?

Right now there is a trend towards high acid wines, which is refreshing after so many years of overripe grapes and tartaric additions, but I fear that the pendulum is swinging too far. More acidity is not always better, and picking grapes early for higher acidity results in unripe green flavors and wines that are out of balance. Many people are turned on by this profile, and I am the first to admit that my wines lean towards that side of the spectrum, but I have observed that overly lean, green wines alienate a lot of wine drinkers.

Minimal intervention, or what could be called non-dogmatic natural winemaking. Wines that I really enjoy are complex and interesting yet balanced and easy going, so in the vineyard and cellar I aspire to create wines with those characteristics.

Is there anything that you do that you consider sets you apart from other colleagues ploughing the furrow?

I believe that I fall into a growing group of likeminded winemakers in Galicia and the rest of the world which share a similar approach to organic practices in the vineyard and avoid enological products in the cellar. On a completely different note, my experience working in London gave me a strong work ethic and commitment to quality.

Varieties in the Ribeira Sacra that you consider of major interest and others that aren’t, for whatever reason, the godello boom and the arrival of corporate muscle in DO Valdeorras and DO Ribeiro.

An underappreciated asset that is disappearing with the rise of godello/mencia/albarino monoculture (and treixadura in Ribeiro seems to be the next to be added to this list) are the field blends in tiny parcels that have been balanced over generations. In each of the minifundios, viticulturalists have been refining the equilibrium between mencia, brancellao, godello, merenzao, and other quality local varieties for many, many years. If a parcel yields a wine that needs more acid, for example, more godello will be planted to replace vines when they die. These field blends are balanced and truly reflective of the terroir, as they are not dominated by varietal characteristics. I understand why the D.O.s want to push varietal wines onto the market on the back of the success of albarino and godello, but it is a shame to see single clone large-scale vineyard plantings overtake the old vine blended parcels.

Visit Zak in Quiroga. By appointment only etc…

Send me an email to set something up: zak@mission.wine